Fun fact! This is a specimen I found on my friend's slate rooftop in Germany! The slate is Hunsruck slate and originated in Bundenbach, Germany!

Phacops is a genus of trilobites in the order Phacopida, family Phacopidae, that lived in Europe, northwestern Africa, North and South America and China from the Late Ordovician until the very end of the Devonian, with a broader time range described from the Late Ordovician. It was a rounded animal, with a globose head and large eyes, and probably fed on detritus. Phacops is often found rolled up ("volvation"), a biological defense mechanism that is widespread among smaller trilobites but further perfected in this genus.

Like in all sighted Phacopina, the eyes of Phacops are compounded of very large, separately set lenses without a common cornea (so called schizochroal eyes), and like almost all other Phacopina, the articulate mid-length part of the body (or thorax) in Phacops has 11 segments.

The central raised area (or glabella) of the headshield (or cephalon) is moderately to strongly inflated near to its front, more or less flattened on the top, falling vertically to or slightly overhanging the border furrow. Up to three lateral furrows may be discernable on the glabella behind the utterly dominating frontal lobe. From the back there is a very distinct occipital ring, and in front of that a distinct preoccipital ring which is weakly divided into a strongly convex central lobe and weakly convex lateral lobes. The large to medium size eyes have a crescent shaped outline, and are elevated high above the cheeks. The steep visual surface is kidney shaped. The back corners of the cephalon (or genal angles) are acutely to bluntly rounded, but a genal spine is lacking in adults. In the ventral surface of the seam (or doublure) is in the frontal half of the cephalon a continuous furrow, delineated by ridges, and with notches laterally. This so-called vindicular furrow serves to lock the rim of the tailshield to the headshield when the trilobite is enrolled. 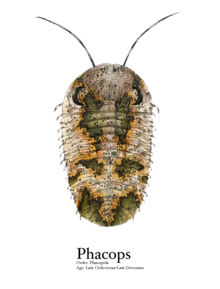 Reconstruction of Phacops with a speculative, cryptic "Rorschach" pattern based on the proposed ability to camouflage.

The axial rings of the thorax do not have convex lateral axial nodes on its outer surface. The tailshield (or pygidium) is well segmented. The pygidial axis has 9 to 11 rings, and the pleural areas to the sides have 5 to 8 pairs of recognizable ribs. Furrows between the ribs are deep, those that divide each rib in frontal and rear bands are very shallow, and the frontal bands are widest. The surface of the exoskeleton is covered in tubercles